Just to get things going…

My faves… eccelestiases, job and ezekiel…
My worst… everything with paul in it

Samson was fucken hilarious! The gospels are great… parable of the wayward son… pretty much got me a drivers license and a job… saved my fucking life

the parts in ezekiel about the sisters is great as well lol its like god really hates whores!

Anyone got anything to shed some light about Jephthah and his daughter? Whys it end up different than abraham and isaac?

and u know… ruined christianity for all time to come…

I had to read the bible a lot as a kid. Still have the same copy and I still crack it open from time to time.

Book of Job is definitely the funniest thing in there

10 Finally, be strong in the Lord and in his mighty power. 11 Put on the full armor of God, so that you can take your stand against the devil’s schemes. 12 For our struggle is not against flesh and blood, but against the rulers, against the authorities, against the powers of this dark world and against the spiritual forces of evil in the heavenly realms. 13 Therefore put on the full armor of God, so that when the day of evil comes, you may be able to stand your ground, and after you have done everything, to stand. 14 Stand firm then, with the belt of truth buckled around your waist, with the breastplate of righteousness in place, 15 and with your feet fitted with the readiness that comes from the gospel of peace.

“But what do you think? A man had two sons, and he came to the first, and said, ‘Son, go work in my vineyard.’ He answered, ‘I will not,’ but afterward he changed his mind, and went. He came to the second, and said the same thing. He answered, ‘I go, sir,’ but he didn’t go. Which of the two did the will of his father?”

They said to him, “The first.”

Jesus said to them, “Most certainly I tell you that the tax collectors and the prostitutes are entering into the Kingdom of God before you. For John came to you in the way of righteousness, and you didn’t believe him, but the tax collectors and the prostitutes believed him. When you saw it, you didn’t even repent afterward, that you might believe him.”

I had to read the bible a lot as a kid. Still have the same copy and I still crack it open from time to time.

Same here. I wish I could read it but I can’t since it’s in Arabic. (and many of the pages have fallen off etc)
Have to settle for online English version which just doesn’t have the feel of the real thing, it’s not like any other book where a pdf is just fine. 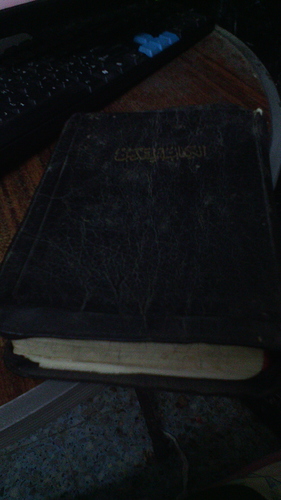 The only book I own.

My copy of that was traslated in Egypt!

im also named after a book of the bible

i didn’t know ‘GayHomo’ was a book of the bible

Not sure why anyone believes anything Paul wrote. He just took over and made a whole list of new rules. He was born years after Jesus died and had no idea what Jesus really preached.

Early Christian history is fascinating. If it could become mainstream it would be really healthy for Christians.

Early Christian history is fascinating. If it could become mainstream it would be really healthy for Christians.

My studies on that subject made me a non-practicing Christian. I still believe, but I won’t get involved in any organized religion.