By the way, I wrote something, a passage of sorts, any thoughts on it would be appreciated..

…exclaimed Ozzi, his tiny, emaciated boy(ish)friend’s body leaning over him like a rusty and defunct lamp post stuck etched into a crevice between some fortunately shaped mortar nodularity and an age-old imperfection on one of the four exterior walls that come together to form a building that seems just a bit more long than wide, the slightly imperfect square-ish freckled brown-and-red brick-and-mortar building was located in downtown Manhattan’s dimly lit gay district, which was more empty than normal that night, it’s regular inhabitants scattered like ants among the various clubs and parties that accompanied the celebration of Cinco de Mayo, such anthills generally tending more toward the new and vibrant lively Northern districts, with some areas appearing more like small mountains than anthills, the young boy, not even twelve, dripped pearly, oily sweat onto Ozzi’s soft and feathered boy chest, his boy oils mixing with Ozzi’s own, unadulterated love energy radiated between the lovers like the incorporeal and translucent outline of heat that lingers above the winding and slithering snake-maze of roads which pave any number of routes from New Mexico through Arizona into California, or the other way round, during a blisteringly humid Arizonian summer. Wax turns liquid, but during periods of edge, hardens, becoming a red latex suit. From afar, it may be gleaned that a duo of Martians are having intercourse near the plundered riches of a Burger King dumpster, an hour after closing.

Any relation to Nicholas J Checkers?

Are you bringing my faith into question?

yeah give me admin 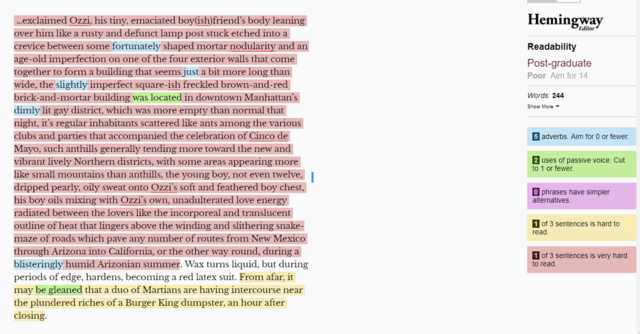 i skimmed
i regret doing even That

I could publish this.