i have been playing this almost exclusively for the past like, month and a half

whomst among you plays this, do you prefer killer or survivor and of those which character is your fave

HaHaa havent played in a while full bloody Claudette and have some legacy Cheetos dust pieces, like killing as the pig but she sucks against people with a brain.

the pig is one of the worse killers i think, her traps help to slow down gens a bit but other than that she’s your typical m1 killer

i am a nurse/claudette player

i hit rank 1 killer with it, it is bad. nothing like a hatch stand off that you cant win, and they are trapped. You count as in a chase with them so the timer doesnt tick.

I don’t see the appeal of this game too much. The serial killer thing is cool but I dunno how I feel about hanging pieple, starting generators

there’s a lot of fuck around potential, especially if you’re playing survivor. sometimes i’ll be doing a generator with someone and then i’ll stop and start crouching and looking at them or nodding at them. then they’ll start teabagging or pointing at me

other times the killer is just messing around. i had a freddy the other day chase us around and down us, then pick us up and just start spinning in circles until we wiggled free 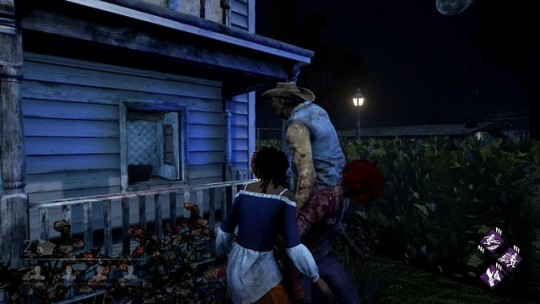 just me, the hillbilly and another claudette casually standing on top of the strode residence lease sign, as you do

even when people aren’t fucking around it’s fun though, even just for the chase/get chased aspect

also @Hype if they find the hatch i just give it to them. standoffs aren’t worth the minimal point gain and just waste everyone’s time in my opinion