Explaining the Colossal by Examining the Inconsiderable: Comedy on Namafia.com

I’ve always been obsessed with the cultivated humor produced on online communities - perhaps it’s because I haven’t logged on for a while but saw something on here and it made me laugh. Not only that - I thought about why I laughed and I guess I wanted to explain the joke a little - but before that here it is unedited: 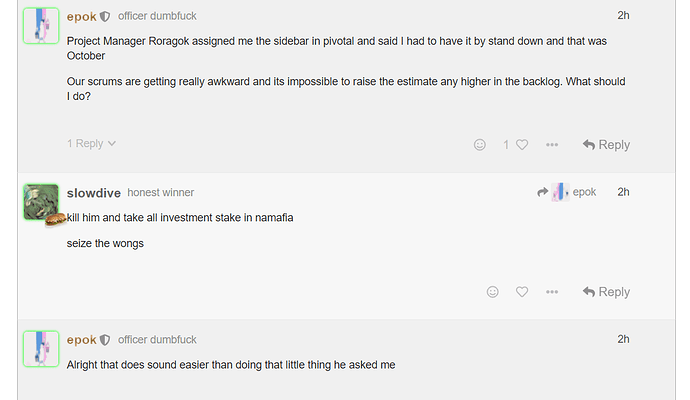 I got it from the blog thread (if you’re not allowed in it’s for members to vent their personal problems and talk about their day (which ultimately makes the joke funnier as it’s not really a place where you often find that jokes)). Dan starts off the joke and I guess one of the funnier parts of it is how he isn’t even setting up someone else: he was just making a joke himself. Going to dodge the obvious inception reference and move on (jokes within jokes) and move on.

Dan’s small joke was (could almost be perceived as self-flatulence) talking about the site development work in an obviously exaggerated fashion poking the bees nest at how neither him nor Roragok (due to holding down a job and social life) put much effort into the site. By talking about scrums and using business plan terminology: it’s almost like he’s painting the idea that there’s a huge backbone to the site’s development and structure so (I didn’t see anyone point this out) the joke is that there’s a disjoint between reality and Dan’s obviously hyperbolic portrayal of the site’s development which I guess made me laugh to imagine there being SCRUM’s and et cetera to the site.

However that is clearly only the first part. That was the start and end of a separate joke but Slowdive - in what seems to be a premeditated fashion - saw an opportunity to extend the humor derived and create an exchange. Playing off of the hyperbole and jest of exaggeration - he takes it a step further and suggests murdering the other site’s administrator (obviously an over-the-top action even if Dan was being serious with his original comment) and to “take all investment stake in namafia” which was the side-splitting part of the screenshot as both people know there is no investment stake but they’re acting like it is - the joke turns more into satire here (rather than just self-flatulence).

Every joke needs a punchline as you just saw and every punchline needs a full stop. Whilst not the highlight - Dan rubs off on one last remark furthering the theme of false representation of the site administration. I know some people gloss over this or take the site for granted but it’s nice to have one community online where members have a good sense of comedic timing and context and use it to build satisfying and jaw-jibbing conversations. I love having a place to turn back to when things get too busy and for that I applaud you! Thanks Dan and Slowdive!

Thanks for this, Benny.

the agile thing is a reach though i dunno if youve realized this but there are people here who work at companies making money and doing company practices. if only they were getting completely wasted and tipping cows or whatever you bogtrotters call fun, you’d find their posts way more relatable eh?

Benny has a job and a social life

Hey Jim, we just finished our daily pasture standup – I just wanted to let you know that I’ve talked to them about it and Bessy and Dolly’s continuous fuckups and lack of putting out will NOT be tolerated.

No need to insult him - he is just helping others to get your joke.

If you bothered to read my post it was that I was reading the site for the first time in a while and saw quite an off kilter joke and thought it would be funny to over-analyse it. I’m not sure why you mentioned working at companies when I acknowledged the agile reference (I do work with computers) and in the past you used to be sensitive about being unemployed (I’m not sure why you tie in self-worth into your job - it’s not healthy for growing into any type of person besides a shallow and slightly above average income provider.

There’s a lot of arguments into projection nowadays and that it’s infinitely more than just a buzzword thrown around: it definitely appears that you have just entirely had an argument with yourself, provoked over nothing and attacking with nothing.

The fact that you seem to have a legitimate insecurity about this site to the point where you see attacks on it whence they are not there is embarrassing and humiliating. @SOPHIE

Youre right and its triggering me could we just talk about the other forms of Comedy on Namafia.com

i literally just shit my pants

@SOPHIE’s absurdist comedy is on display again; he has been gradually removing the site’s subforums daily!
I didn’t get the joke at first but now that I realize that he’s just trolling I really appreciate it much more.

Why is he trying to put everything in one category? Is this a desperate attempt to increase site activity by forcing us to look at threads we don’t care about?