#plasma might f around and get an SA team 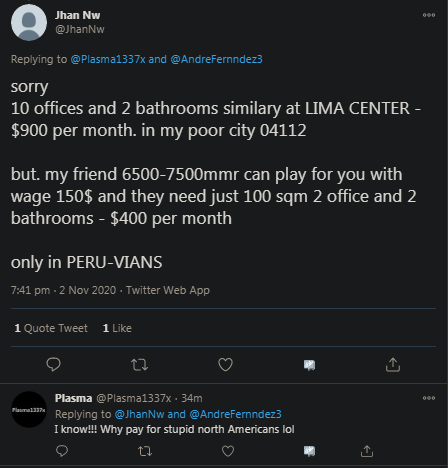 If only I could keep my mouth shut yeah.. They were ok. SA dota not a terrible investment. Especially Mexican dota team.

I may be making excuses for myself, Im sober now. After 12 years, after 12 fucking years. The only thing I was planning on doing with my NA dota winnings was buying cocaine and degeneracy.

Tell me, 12 years of trying to quit stopped after I told the truth. Is it worth? I think so.

if u can't beat em

huh? more like the second coming of Salvador Allende after that little tirade about better pay for our brown brothers south of the border

I said that more because our NA brethren are ■■■■■■■■ They think they are worth (4zoomers) $5kusd per player $2.5k coach and manager + team house. Half a mil a year for what? 2-3k english viewers per match in BTS? Trying to get them to come down to SA standards just so they can get employed.

SA area bunch of degenerates. If they had a better argument then herp derp raccista i might have actually retracted what I said. All they did was piss me off. Thats my biggest driver too, being pissed off.