Obviously doing this before seeing what happens at the summit is questionable and I’ll probably change a few, anyway 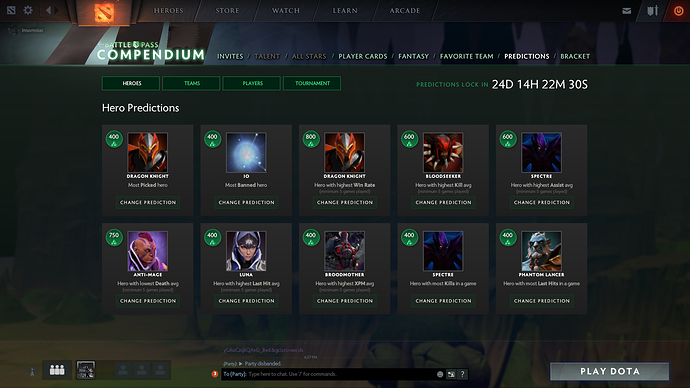 I dont spend money on videogaming

I dont spend money on videogaming

i dont support the videogame industry.

i think u just dont have any money

i predict an NA team will win TI this year

i predict an NA team will win TI this year

EG or OpTiC could both realistically take it

although the EGs of years past were stronger than this one, this is really the first time we’ve had two separate teams with a chance to win it. I’d say overall the region is stronger than ever

a lot of it depends on the brackets, if optic face the chinese teams they will will do really well. the only good chinese team vs the NA teams is LGD, the way they draft is really meh compared to NA atm. that said if optic runs into VP early it’s gonna be tough. on the otherside of things I think the chinese teams matchup well vs somebody like VP etc. its a lot of bracket stuff.

that sounds similar to this patch xd

Not seeing any teams absolutely dominating with one or two framed up lineups, all the contenders for TI pick the same heroes so far, we’ll have to see some scrims before we make a decision.

most of the teams havent done any scrims yet so this summits not really a good indication of what teams will be good at ti. (not sure about the euro teams but I know EG etc hasnt started scrimming yet.) 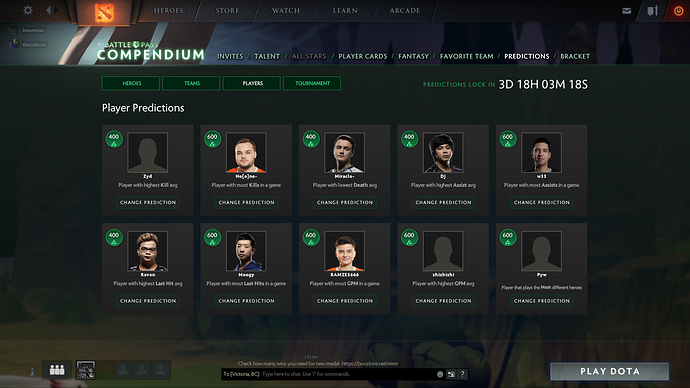 Just finished my player predictions. Put a fair bit of thought into each one so I’ll try to explain each choice.

Player with highest kill average: This is probably going to be a core player, on a team that wins a lot of games but also who doesn’t win too quickly, so I think that eliminates all the VP players.

Personally I’m going with Zyd, Team Serenity’s carry player. I’m super high on this team after watching the China quals and I think they’re going to do really well and surprise a lot of people.

Most kills in a game: no_one. I think VP will have at least one long game where no_one goes off for 20+ kills. You also have to take into account which heroes teams pick for their mids, and VP loves to pick qop for no_one.

Lowest death average: Miracle These average ones are hard because you have to think about which teams are going to do well, what style of dota they play, and who they tend to protect in their lineup. I’d say Liquid as a whole plays around Miracle more than any other player, and Kuro is very good at making his team play disciplined, smart dota. You don’t see this team diving super deep and wiping themselves that often.

Highest assist average: DJ. I think this will be a support player, when you think about average overall. DJ is extremely good at what he does, he tends to look for ganks more than farm, and fnatic plays lots of LONG games on average. So I’m taking DJ here.

Most assists in a game: w33. For this one I’m thinking simply about which types of heroes teams pick for their players, and paiN has been known to pick zeus for w33. I think this award will go to a player who plays zeus, and w33 is a decent bet to have a good zeus game.

Highest last hit average: Raven. Raven is an extremely good farmer, and he’s set many records for last hits and GPM. This one is hard to predict, and could be a poor choice if TNC lose a lot more games than they win. However I’m gonna take a bit of a risk and go with Raven. When TNC wins he tends to have a massive amount of last hits in a game, they also like to pick him heroes that farm a LOT.

Most last hits in a game: Moogy. This is another single game prediction, and I think it will go to a player that plays anti-mage. Newbee have shown that they like to pick anti-mage for Moogy, and they play a reasonable amount of long games, so I think the chance of Newbee getting into a long game with Moogy on anti-mage is reasonable, and if that happens I think he’ll own this record.

Most GPM in a game: RAMZES66. I think this award will come in a 25 minute blowout of a game, where VP take every tower + one roshan, while RAMZSES is on a hero with lots of farm and lots of kills. Can’t really say what hero that might be, but he’s my choice for this award.

SumaiL is another reasonable choice, as EG have picked him Alchemist in the past, but I’m going with RAMZSES.

Player with highest GPM average: Zhizhizhi. Another team Serenity player, who looked extremely impressive in the China qualifiers. I think Serenity is going to win a lot of games, and I think zhizhizhi is going to farm extremely well in those games. Oddball choice but that’s who I am going with.

Player who players the most different heroes: Pyw. Another team Serenity player, this team picks an extremely wide variety of heroes, similiar to Wings at ti6. Support players tend to have one of the broadest range of heroes that get picked for them, so I just picked one of their two support players. This is a questionable choice, but I’m going more with the team than the player here.

Someone who isn’t biased, tell me: what are na’s chances

I think they’re reasonable, wouldnt be suprised if EG or Optic got top 4.

I’m going with a lot of serenity players. Zhizhizhi and XinQ are some baller ass players

goin with all players who are playing 3x on day 1. some teams only play 2x. wish I had more good golden cards

you can see the schedule here: https://liquipedia.net/dota2/The_International/2018/Group_Stage

trying to organise a ti8 playoff bracket challenge, $5 buyin and winner take all