Had a couple of good DotA games with Jones and the bros.

Unfortunately the party was killed when @Osiris decided to AFK and miss accepting the game. Thanks for ruining my night.

As the sole member capable of not being a whinging crybaby, insufferable backseater, or griefing thrower; I accept responsibility for not holding the stack together. my 1/18/20 jakiro should be proof of my prowess as a gamer. 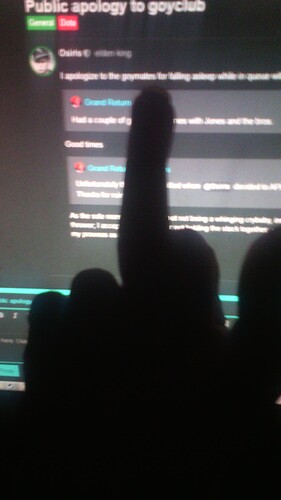 The first ever exile from the teamspeak for osiris starts now.

Bring out our champion, the sentinel

the staff strikes back

back when you started with 603 gold so i would buy headdress first item on dazzle then rush assault cuirass because armor. back when shallow grave was an ultimate

You wil regret this

i have apologized i can handle the personal regret

This is not a genuine apology you called them crybabies. Try again

the apology was genuine and sincere. you can apologize to crybabies. as the group's anchor both skill wise and realiably trying to win the game (i dont destroy items or aggressively feed because i randomed elder titan and that hero is buttcheeks) it's my job

what do these numbers mean

This is not a diss by the way, you were signed up to be the toprak replacment and you are doing great at that.

i believe i was recruited by brendan to be a jones stand in but i had to relearn how to press buttons as invoker. i'd also wager a random hero game toprak doesn't play support because he thinks you 'do nothing'

win rate is trending up even after a bad day. only tragedy was letting matty down that one night

The teamspeak is in its best form yet. I'm so happy and thankful for our incredible community.

ET is a great hero.