-i go school to become good engineer for my country

I can help you pirate games if you want.
I recommend Factorio - it’s very easy to pirate and a great game.

Born in Northern Canada. Lived in Ontario for 5 years during college and moved back for work. Been back up North for 6 years now.

I Genuinely Didnt Know He Worked For Valve…Pinkie Swear! 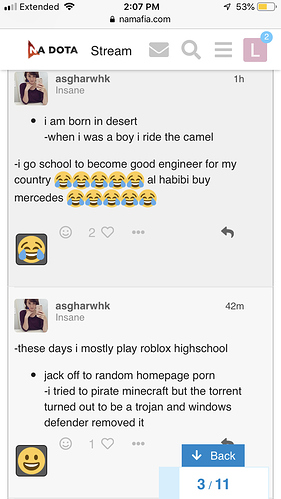 After playing crusader kings 2 for a couple of hours with robert - I can’t say I vouch for these games’ quality, despite liking Civ5.

i’ve been floating between games ever since bfa came out, there really isnt much to play at all!

If you haven’t played factorio you probably should try it. It’s the most highly reviewed game on steam for a reason.
One of a kind - the game has Universal Appeal I think.
It’s “Legal” to pirate it too; just doesn’t allow mods unless you buy it

Don’t look up stuff on the game though, no need to spoil it if you haven’t already :- )