i play this with magic @gwez and some other guys still.

games alright, i like the mvp system and some of the reworks.

Throne of lies is the superior deduction game

This server is better when the goyclub doesn’t take over.
Sadly, they have taken over this game. If I ever run this game again, I will not allow them to play.

@ me next time u guys play I’ll redownload it 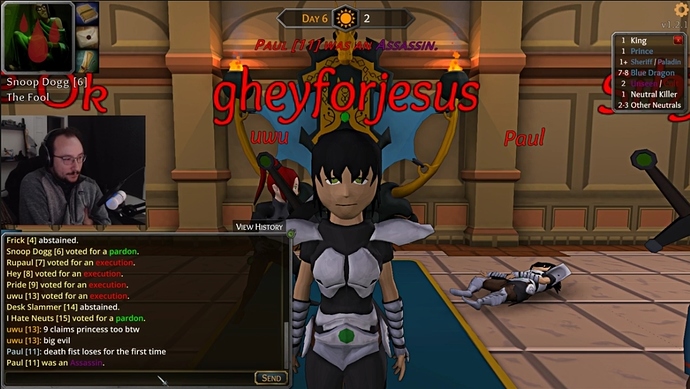 if the toggling of a facecam is what ruins the stream ur just looking for complaints. there’s way better reasons why a stream is shit

without a facecam how am i gonna derive enjoyment from b9’s reaction to his teammates saying FUCK YOU to teachother in chat, he’s not gonna laugh boisterously

Before facecam I would occasionally find him funny and relaxing.

Yeah I wouldn’t want to watch myself either

Sorry - let me put it in words you all would understand - Watching him is very MonkaS. I just look at it and get a feeling of 4Head.

you just made yourself look stupid but alright

you just made yourself look stupid but alright

Of course, the guy that thinks attractive women turning on a webcam are the bane of all evil, loses all interest in a stream and is disgusted when an UNATTRACTIVE, BALDING MALE does it.