What's Wrong With Redditors: The Thread

I saw a guy posting in the reddit DotA 2 Discord server about how he “misses the Gambler” from DotA 1 so I did some digging into his old posts, and going back just 5 or so pages (about a weeks worth of his posts) I found him pretty relentlessly bringing up the fact that he’s a hipster DotA 1 player. 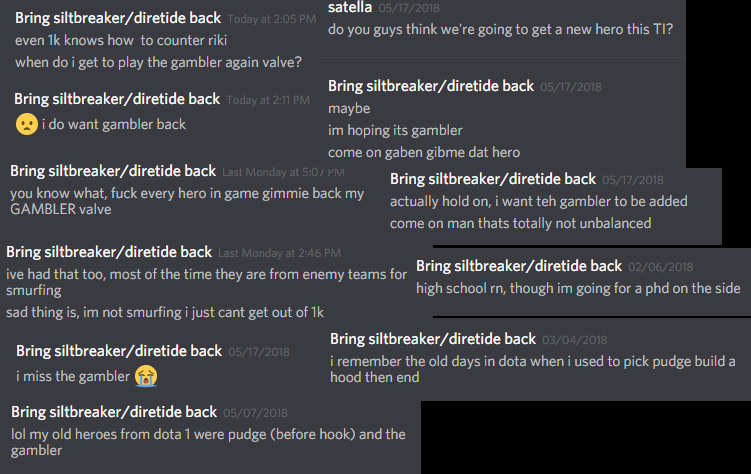 From there I found his steam and dotabuff and decided to check that out. 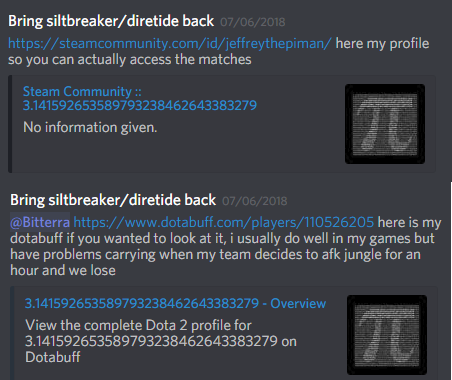 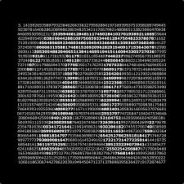 To no surprise his first games were in 2014 and for over a page worth of games he didn’t even buy boots. Signs of an obvious new player, right? So I decided to confront him about his ridiculous claims.

Occam’s Razor would dictate that the most simplistic and obvious answer is the truthful one. So with that in mind I ask you: is he an old time DotA 1 player who played for 2 months 13 years ago but remembers vividly how fantastic it was to play one particular hero that is often reminisced and fantasized about on reddit that was held back from playing DotA 2 by his inability to acquire a decent laptop and upon obtaining one proceeded to not buy boots make shadow blade on Riki for over a page of games to “troll” not because he didn’t know any better all while obtaining a PhD during his free time home from high school? Or is he just a dumb liar?

I think the worst part about leddit is just how earnestly they post even though you know they’re ass. On nadota good players have the absolute worst posts

This is our #MeToo

kzz sacrificed his self and had his soul descend into the underworld, becoming the Omega Redditor, and in the process saving NA DotA from the unwashed hordes of reddit.

That isn’t kzz, that’s someone (probably nmagane) pretending to be him

I’ve read through some of his posts and it does really seem like him, either that or someone is doing a REALLY (we’re approaching insanity territory at that point, the account has like 2k posts) good job at impersonating him.

Have you guys seen that picture with a bunch of pictures of description of old OP Dota 1 heroes? I know “gambler” and Riki were on it and redditors constantly bring up that shit in my 3k games “did you know the original Riki had shadow ward and was perma invis??”

I remember when you had to walk both ways uphill in the snow with nothing but a thin trail of electrified wire to guide your way to get to the secret shop.

You really took the time to make this thread.

You took time to share your thoughts on Jordain petersain

if that is kzz then kzz must still play dota on another account, which seems unlikely.