Town beats the scum team of sdaddy iaafr and osiris

Caught @sdadasdas in a web of his bullshit. @iaafr agreeing all of day 2 and not lynching sdad day 3 made me super sus. Went back over iaafr after he didn't lynch sdad day 3, saw the passive-aggressive bussing by him and sdad day 2, but then no lynch day 3 convinced me.

@Osiris day 4 opening with a push on me despite day 3 made me sus, so I went back and read my day 1 and 2 on him and realized he was likely scum due to my original reasons for sussing him, a definite TMI feeling in the world where iaafr is scum so @hbotz wasn't, and because of strange interactions between him and sdad. I half made an iso for him for day 4, then realized the game was too low activity and no one was reading them.

Iaafr making it a split vote day 4 on me despite mind melding with me and my pushes on day 2 confirmed him as scum after my previous iso. I just wanted to start on hbotz and see who sheeped and who pushed otherwise in case I was wrong. I'd also had an iso ready for iaafr for when I made the switch, but two going on him just made it worth to flip my vote cause the game was so inactive and 3 votes would've definitely been majority

I remember being hella busy during day 3 when the shitstorm started kind of just deflating the whole game. Still had fun and appreciate the work put in though. The setup was certainly fun

townreading all mafia is my favorite play

I'd have been way more hesitant to vote on you if you'd voted sdad.

Also, why put a scum in the noms?

we floated the idea, i ended up being against it but got overruled because i wasnt decisive enough in vetoing it 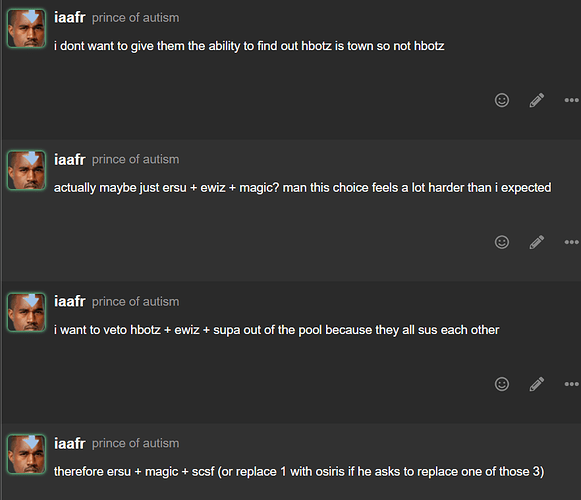 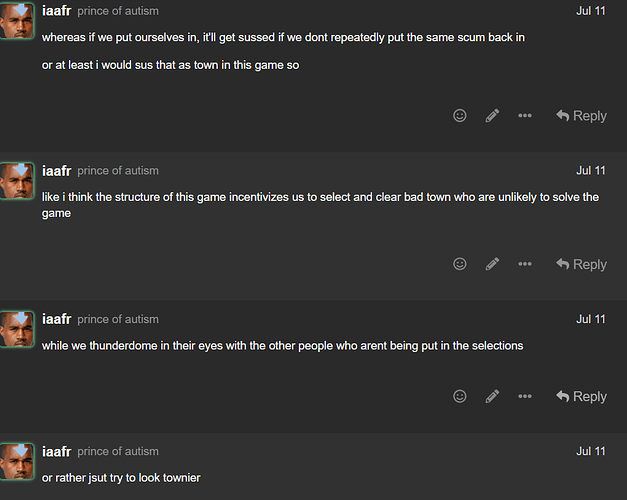 Day 2 I would have done hbotz+magic+ersu/epok. Hbotz would've been pushed hard, and him flipping town likely gets me mislynched D3. Then day 4 pool is magic+ersu+epok. Likely leaves a d5 lynch on epok/ersu. Idk: with me out of the game there'd have been magic as the only active town player, with scsf putting out good reads but not nearly as active

Also, hbotz in d2 pool makes me much, much less likely to spend the day scumhunting outside of the pool

i could see how putting him in wouldve been good tho

Yeah, I mean it's have been him or an afk. If the afk died, then I'd push hbotz again d3, one of us dies. D4 pool would be magic+other afk+any town aside me and hbotz. D5 would've been the mislynch on either me or hbotz, whoever survived d3

I just found the d2 pool super strange, especially with a scum in it. Wolfy+magic+hbotz or wolfy+hbotz+ersu/epok or wolfy+magic+ersu/epok makes far more sense.

I think because of how vocal my d1 was, there wouldn't be a good reason to throw me in d2 pool. Or ever, because a wrong push from me on hbotz means I'm mislynched on an odd day. I get the magic+scsf combo, though, since magic had been pushing scsf. I operated under the assumption d2 was 3 town, though

we floated this idea but chickened out