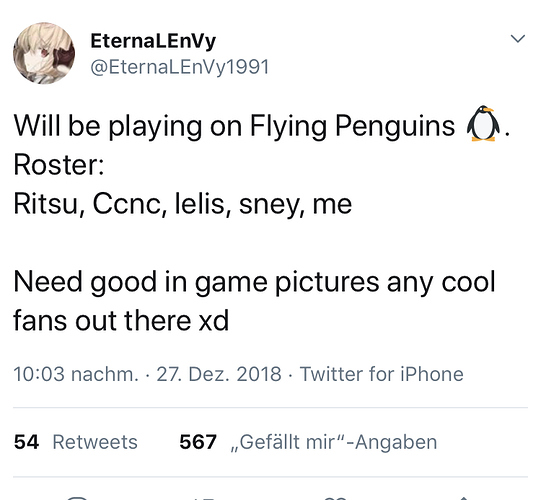 or did he rebrand as some similar sounding weeb name?

for this team to pan out Sneyking Lelis AND EE all have to do really really well in their respective roles, that just seems unlikely

Sneyking has been playing well on any his last couple teams imo. This team is dead in a few months ritsu gonna kill it

Sneyking looked pretty weak at ti8 at times I wouldn’t say he’s a sure thing, he’s probably the best player between him, lelis, and EE. It’s just you have to consider there’s a CHANCE he might not work out, and then EE and Lelis ALSO have to work out (imo), idk about this team

I still can’t believe how people are willing to play with somebody as bad as ccnc. It’s fucking unbelievable and I would rather have sneyking as my mid laner lol

Skill doesnt matter when youre autistic as fuck.
Good luck to them

The longer I look at the players the funnier this team gets to me. I would pay money to see them in a social setting, I have no idea how they’ll stand eachother

i mean it’s actually insane to think about, has there ever been a team in the history of DotA with less social/personality intangibles than this one?

Im really curious how this team plays out

Potm bottom/dignitas was my favorite team

make my team ur favorite now

im super not up to date

whats ur team’s name ill for sure stan u

started from the potm

its just jae urboyjc and i right now though

you can put me and my Russian friend in