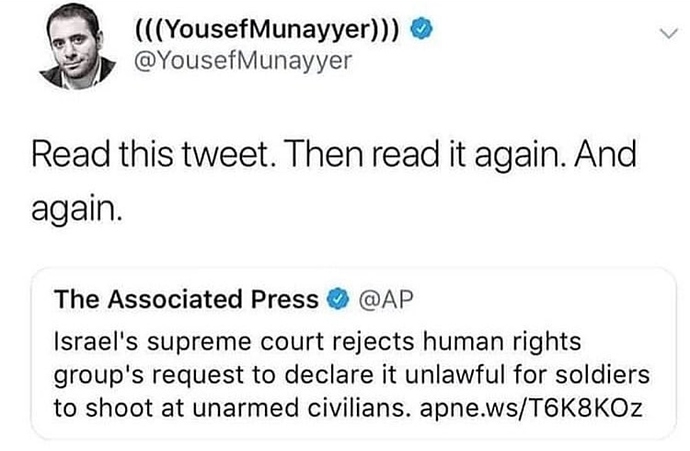 All week I have been hearing this dumb shit on the radio about this congresswoman who made some comments about AIPAC and how our politicians shouldn’t be influenced by foreign countries and how the blatant allegiance to Israel in American politics isn’t healthy.

Predictably, this prompted a round of gross blatant allegiance to Israel from US politicians across the board, mostly saying things like “the comments were shockingly antisemitic” and “we just can’t believe someone would say that after what the country of Israel went through in the Holocaust” (actual quote)

The most alarming thing to me was that these rebukes of “antisemitism” seemed to be the dominant political response across the board and they weren’t called out for the ridiculous, reductive and politically manipulative arguments they are - NPR just accepted this and proceeded forward as if this was a reasonable response to the situation and let the assumption stand that calling out AIPAC, one of the biggest lobbying influences in US politics, was somehow inherently antisemitic.

Let’s discuss. Is disliking AIPAC antisemitic? What about disagreeing with the current actions and attitudes of modern-day Israel? How many Jewish things is it acceptable to dislike before somebody becomes a virulent antisemite and Holocaust denier?

It’s not anti-Semitic. There’s very valid criticism of Israeli influence over our own politicis and of their own choices within Israeli. The us has turned a blind eye to them for decades

Ok come on the “it’s all about the benjamins

Israel_palestine should rebrand as a unified state with two cultures instead of trying to sustain some sort of pecking order. There’s no way to change the past of zionist terrorists forcing Palestinians out of their homes; why not just accept that the ethnostate glove doesn’t fit and work towards unity instead of divisiveness

im not a fan of israel at all. in fact i think there are way too many dual citizen politicians in our government.

they always lobby us to give them money so they can commit more war crimes and shit.
they do a lot of evil shit and they even bombed us in the past.

her questioning of elliot abrams was great

at my ex’s school there was so much birthright shit EVERYWHERE like advertisements, student shit etc. there were literally 12 Zionist groups on campus i believe

What is “birthright shit”

yes why would the jewish colleges not support israel? You’ll find that they do anything to make sure students dont care about Palestine and paint israel as the victims.

The playfulness of Juju & Jordash’s music is often what makes it so rewarding. No matter where their tracks or live sets begin, you can never be quite sure where they’re going to end up, or where they might take you along the way. In contrast to their more lighthearted work, however, there’s a disconcerting directness to Unleash The Golem Part 2 's lead track, “Coffin Train,” which chugs onward for 17 sludgy minutes, belching out clouds of dissonance like engine smoke. There’s no respite to be found here, just the screech of train wheel upon rail and the suffocating aromas of soot and sweat. As its title implies, “Coffin Train Getaway” on the flip is more fleet footed. It’s just as unsettling, though, driven by an acid-flecked bassline that seems to accelerate as the track plays. You could certainly dance to it, but you’d probably need to step outside for air afterwards.

The two Golem 12-inches released so far are the duo’s strongest and most self-contained material to date. That’s largely thanks to the series’ overarching concept, which uses the metaphor of the golem—a creature from Jewish mythology, animated to protect its people but which eventually turns upon its creators—to explore the difficult questions surrounding the current state of Israel. Just as there are no concrete answers to the questions raised—via track titles, artwork and a press release that reads, only half-jokingly, “and who said dance music couldn’t be about the Holocaust?”—so the music it contains is terse and ambiguous. These are dark and brooding meditations on very pertinent issues, and in Juju & Jordash’s hands, techno feels like the most powerful conduit for their delivery.

i feel like most jews are pretty against the isreali government except the old racist ones.