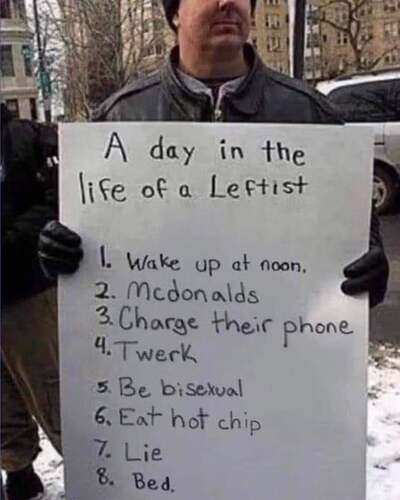 where is peepee and poopoo?

it doesn't matter to the liberals. they put it wherever they can

soon they will be snorting seamin

a real leftist twerks AFTER be bisexual

triggered by the equivalence of liberals and leftists here. if slowdive isn't here to do that, i guess ill take up the reigns

you’re all the same

i think leftists and libs just care about different things. the libs like the leftists cuz leftists are basically forced to vote for them since there isn't ever a real leftist candidate in this country, but the leftists really dislike the libs because they are forced to vote for candidates they dont like since most of them would prefer biden to trump (but think both are pretty horrible).

Libs care about: social issues (the gay rights, racism (sorta bill clinton imprisoned more black people than like anyone), ect) and a welfare state, taxing the middle and upper middle class mostly (while not taxing truely rich people meaningfully despite threatening to), and turbo funding the cops.
Leftists care about: workers rights, unions, using taxes for public services instead of blowing up the middle east

i'm actually more towards the liberal side of things when compared to many people who call themselves leftists (i guess im a bernie bro ew), and i think many liberal voters dont like what liberal candidates do, but vote for them cuz the social issues are what are most important to them and at the end of the day they dont like but wont die on the hill of liberal governments having opressive police states cuz it doesn't really effect most of the voting base.

i had to google who this is but im just not that into twitch culture. a hyper rich leftists streamer is super funny tho. i dont think it really makes me mad but its a p good meme.

It’s definitely not true, leftists will vote for joe Biden because he wants to smash white supremacy. Alt righters literally won’t vote at all if they have no candidates who they support

Also friend saying liberals are the ones focused on social issues but I’ve yet to see that, most people focused on giving children hormones to mutilate their bodies chemically are self identified communists

did ewiz ever say if he voted biden or not

not that it mattered in virginia/dc anyway iirc