wow can't believe town pulled it off. this was extremely terrorist sided, but it was fine since most games only last 3-4 days and it would take the 3rd night for them to ramp up in a 2 v 7.

what did you all think?

im sure interesting discourse will be in this thread

thank you for the host @lwyrup

look at these sneaky players.

Thanks for the host @lwyrup

The game was brutal. We had zero mislynches since @big_ass decided to suicide on D1. That said, he found both scum.

Overall I played too carefully.

Congratulations town of day 3. If you died along the way you are a loser in my books

@You_lose_i_win you were my most valuable teammate by far

saw 0 issues in that game, other then the roleplaying on day 3 when there wasn't a choice (had to actually inform them of this fact, should be obvious)

I tried my best to not let outside influence affect my decision-making, especially since "the collective" was wrong at least once.

If posting role PMs is going to be an every game thing (it is - a certain player has posted his role pm Day 1 three games in a row) it needs to be established as completely useless info. Thus, though it may have appeared that I was ruining the game by creating a fake mafia PM as town, I was actually saving the forum. PMs should be completely meaningless - every player should have the ability to create a fake PM in a matter of minutes if needed. We can take this discussion offline for a ramp-up session for those of you who aren't yet meeting the baseline here - it is my expectation that all of you will be able to do this by EOM February. 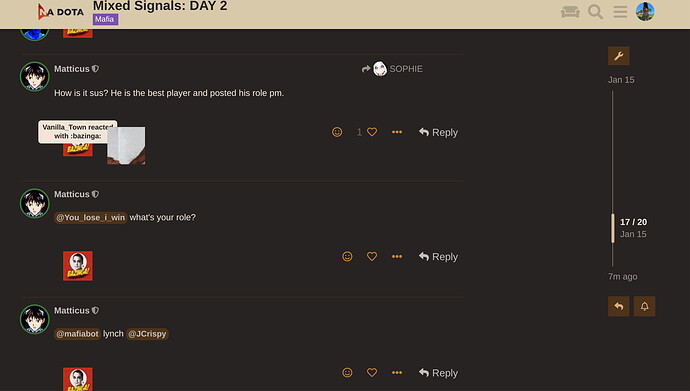 especially since "the collective" was wrong at least once.

failed the reaction test on the faked mafia PM.

Given the abundance of role pms being posted in games, a host should send out the town role pms to the mafia at least once to punish this behavior.

Also, the NKs made no sense to me. Very unclear to me why Jcrispy didn't get NK'd and why I survived.

There were other variants in mind. One example that I almost went with last second was every player has 1.00 signal TOTAL (no night kills either) to work with across the whole game. I wanted a game that was completely solvable with coordinated effort to see what the forum could do. This game was made with Matticus, my ideal mafia player, in mind from the start and every decision to scrap other ideas was based around if Matticus could rally a group to do the right play. That said I rolled the roles randomly once and I wouldn't reroll even if matt wasn't town.

Osiris has had the misfortune of having to be the only mafia in my last game, then be first mafia picked out in this game (where town basically broke every rule to shit on him). Probably very exhausting

Given the abundance of role pms being posted in games, a host should send out the town role pms to the mafia at least once to punish this behavior.

The reality is this is untenable and you have to draw the line somewhere and ask @JCrispy not to cross it for the sake of mafia as a whole on this forum. I think drawing the line after posting doctored images of a role PM is best because it is funny and makes us look like monkeys to the rest of the mafia-playing world