In my previous game I was griefed by yns who let personality politics jade and anger him before the game had even started. However - there is a much bigger player at concern on NaMafia: Slowdive.

This player is consistently and without fail AFK for games. Here’s some statistics:

On Day 1 there were 1023 posts in total. Slowdive contributed eight overall. Here is some of his contributions: 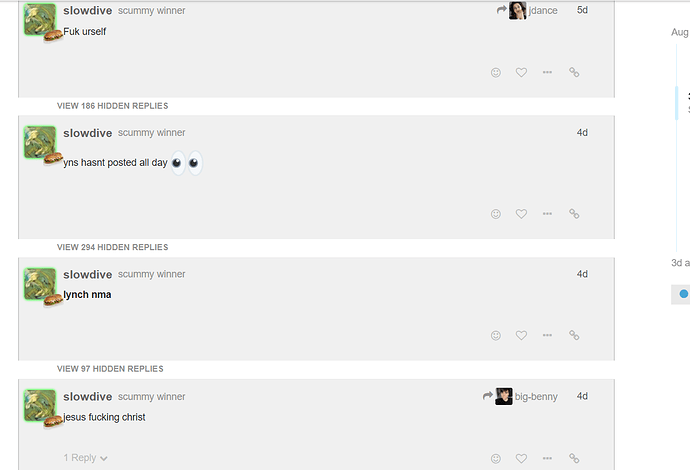 Not only did he have the lowest interaction by a longshot but he also had the worst posts. Maybe he’s just not a fan of Day 1 gaming? No - for day 2 despite being 209 posts (a majority of these aimed at Slowdive) he posted twice overall.

He was clearly not busy at these posts were at different times of the two day period for Day 1 and he has pulled this before. Let’s look at Roragak’s last hosted game. Out of 1240 posts, Slowdive posted 22 times and on top of that: they were mostly flame posts and unhelpful trite. 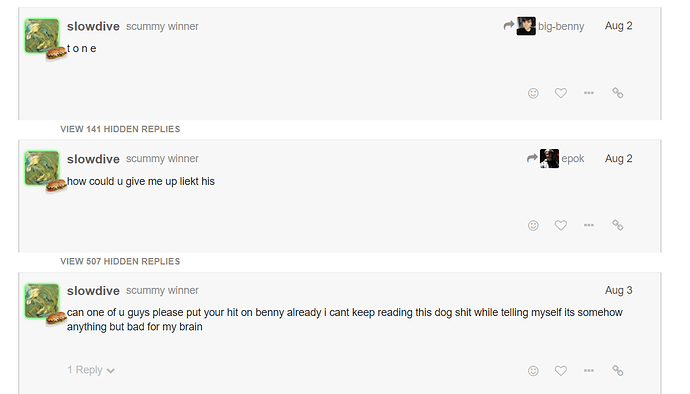 image.jpg705×108 24.9 KB
six of them. Mostly lynches too. This game had some other sub-optimal performers but they have usually made it up in other games. Slowdive clearly does not understand the rules of mafia and chooses to troll games rather than risk participation. I am not asking for any moderated action: I would just like to point out this gentrification of namafia and why Epok hand-chose this player from Throne of Lies to join the community. Thanks for reading.

I’d hate to vouch for banning players on namafia as it is not in the spirit of the site it’s just a concern that seems to be escalating.

I think we should ban you

If anyone were to get banned it would be you for intentionally griefing the last game in a humiliating (for yourself) rage.

The only person who was griefed was yourself due to a lack of anger restraint.

What? You’re the one who flew into a fit of rage.

Spoken through tears of rage.

Are you talking about me? I won.

Slowdive, as town you have to give other people enough information about you to read you as town

That’s probably the most important part of town play

Slowdive is far and away not the only offender here though

I’d say anyone in KKat range or less is lowposting and should have a good reason for it (like afking day 1 with a strong day 2 power role). Otherwise it’s mild ruining

It’s not a meme

The game Kkat hosted had only one “le goy club”.

I wouldn’t respond: he only said that to avoid an actual excuse.

What this site has is a trust problem. We do not trust each other.

i only ever see him actually try

yeah i agree with iaafr pretty much, while there are claims that nma and benny ghost in teamspeak we’ve never had proof, and although they get annoying in some games the people they annoy do way more “game ruining” type of stuff than nma/benny just being annoying.