some people think it's a problem and others don't.

in my personal opinion the game of mafia is meant to be based off reads. if there is nothing to read then you cannot read.

Neither option is correct, people should learn to play together - yes that means you should stop harassing people and it also means when gamut hears "your lowposting is making you less fun to play with, engage more" he should listen

i'm not even harassing anyone.

that hinders the game

"your lowposting is making you less fun to play with, engage more"

What fucking world do you people live in. 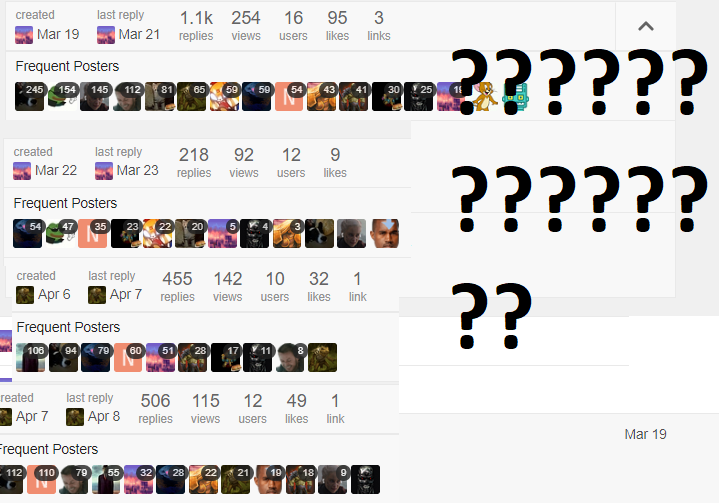 I literally clicked on 4 random phases I've played in this year and all the ones Kyle's in he has lower postcounts than me.

in my personal opinion the game of mafia is meant to be based off reads. if there is nothing to read then you cannot read.

Hey guy who allegedly loves reading: I never once claimed it should be ok to not post at all. You'll note that even in the game I was intentionally ghosting, I did still make five posts, which is a world away from "nothing to read". (Which incidentally happened more, with other players in the game, without any incident.)

What I'm actually saying is: You cannot realistically expect every player to make 30 posts - or even 10 - every phase of every game. It's not going to happen. You can't gather 10+ people in a thing that takes over a week and not have at least 2 people over the course of the game have long work days, or random company, or any number of things that keeps them out of the action for a period of time.

You aren't entitled to a minimum threshold of content per player. It's fucking ludicrous.

On the other hand, I've been playing Mafia for 15 years and I've managed to entirely avoid chimping out and self-voting or posting my role PM the entire time. Never even come close. And I bet if I played for 60 years I still wouldn't. Because that should be a realistic expectation of every player.

I'm not mad, I'm just constantly astounded at how you don't even live in this plane of reality.

i've never posted my role pm. and self voting is as much of a strat as afking.

i self voted because i was tilted and i felt it was best for town.

get over yourself gamut.

that's like queueing up for a game of ranked dota and then using the bathroom for half the game.

Dota takes an hour and requires your absolute attention every second.

Mafia takes entire days, often a week or more, and if you're paying absolute attention to it every second there's something wrong with you.

They're not the same thing at all.

If you really need to make this a Dota metaphor, it's more like you having a tantrum when your teammate farms instead of TPing to fight with you, so you feed in the enemy woods solo 3 times saying "WHERE'S MY HELP???"

Playing like shit and blaming teammates because they're not playing the game "right" in your eyes.

Gamut calm down, Kyle will still walk away thinking he won this thread.