Sir what I have suggested is Guardian Greaves. Do you rather rush a Shivas Guard or a Heart Of Tarrasque?

yes i agree. op lives in a fantasy world

The emotes were my way of showing agreement and support.

Deso Tide is really good; but the lifesteal nerf was literally targeting Tidehunter+Mars and Lone Druid. (and the shitlord morph players)

So it's hard to play carry tide when Lifesteal got so nerfed.

That's why I'm working on the magic dmg version.

Something to keep in mind is; when you go 3x falcon blade; your job is to just follow the enemy core and farm his camps lol; then swing to lane and catch it and drag it with you to their enemy camps. lmao

why did people respond to this

We are trying to find the best tide build. 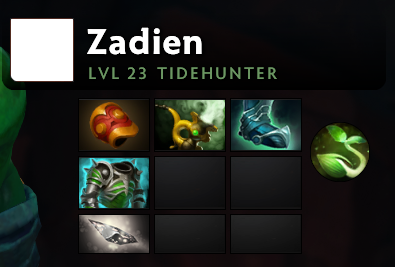 I see 2 slots for falcon blades

ive been trying Phase > 3x Falcon > Maelstrom which is pretty solid cause if you're oom you can just auto attack for great damage and you take none.

I'm always really bad at this but I never tell people to buy wand because I expect it to be expected lol.

Tried no souls SF today. Didn't work out, won't be doing it again.

I have found the official build:

Win lane by gushing and running at them, can level gush if you're winning otherwise it's max smash to farm the blink. With 2 falcons your mana is pretty good, add a mana boots somewhere in there if you'll want lotus later

From there it's situational but all games I won I had travels, lotus, shivas and games I lost I had aghs, octarine, refresher

Going to play another using this formula will let you know how it goes. I uninstalled dota last night and then reinstalled it this morning (extremely bad)

you are really cycling through dota quick if you're already there. speedrunner material

just remembered your sekiro any%

What was my sekiro any%